Mainstream culture tells us to travel everywhere by car, one or maybe two people per car. This choice makes

sense at times.  But in general it just makes me yawn. Boring. Costly to people and planet. Confining. Unproductive.

I’m writing this on the BOLT bus as Thor and I start a short vacation to Victoria, Canada. (Note: I usually post on Thursdays, but I’m a day late. I blame this on not yet having found my own personal Sherpa to assist me with my life. Applicants are not lining up as hoped).

Why are Thor and I using BOLT when we could have driven our own car? Here are six benefits, in no particular order. (Note: I’m receiving no revenue from BOLT, or from any other company.)

BOLT (any transit) pollutes less. I realize that climate change will not be turned around by my household driving as little as possible. But being a small part of the solution means a lot to me.

BOLTing is productive. I could not be writing this post right now if I were driving. If Thor were driving, I would try to write and be steadily interrupted by a husband who understandably wants conversation. Instead, Thor is currently pursuing his passion for reading news on his tablet. Now and then he turns to me, which leads to the next benefit.

BOLTing is sexy. Thor and I just shared a lingering kiss. This doesn’t happen when we drive. Most importantly, we never fight when we take transit. We are serene and relaxed as we peruse the passing scenery. Our loving Buddha natures come out. When we drive, we get into terrible fights. I’m embarrassed to admit that, but it’s true. We hate each others’ driving, and can’t keep our mouths shut about it. Counseling has not helped with our car arguments. But using transit solves the problem altogether. Here is more on the sexiness of transit. 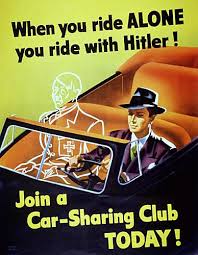 BOLTing (any transit) unleashes me into public space, into the world of humanity. We got to be around people of four different ethnicities as we rode a TriMet bus to the BOLT bus stop in downtown Portland. (For Portland, that’s really good.)  Once there, we got to hear a man belting out a song just for the hell of it. (Yes, he was mentally ill, and harmless, as most mentally ill people are). A blind man with a cane waited for BOLT along with us, as did people of many different agse and income levels. My car confines me from contact with all this diversity and richness. See When Cars Are Like Condoms.

BOLTing (any transit) is about ten times safer than driving. Traffic fatalities are ten times greater in personal vehicles than transit vehicles. I got this fact from the Victoria Transport Policy Institute. I called up Todd Litman, its director, the other day to suggest getting together for coffee and conversation when we’re in Victoria. He promptly invited Thor and me to join his family tonight for dinner. We happily accepted. See how transit brings people together?

BOLTing is far cheaper than driving. Gas plus wear and tear on our car would have cost us 3-4 times the cost of our BOLT tickets, which were $24 each. Or, they originally cost that. We were so disorganized that we changed our tickets twice, so we paid some modest change fees. (I think it’s very cool that the BOLT bus would let us change our minds repeatedly. Being cut that kind of slack almost makes up for not having my own Sherpa.) We did have more travel costs besides BOLT, including ferry tickets. But still less than driving.

BOLTing and transit in general makes us richer in what matters.

Coming up next week: the kickoff of the Threads campaign, in which my assistant Drew and I will give away an artsy, made in the U.S., Threads T-shirt every week to a Diamond-Cut Life email subscriber. 541 Threads, based in Bend, Oregon, supplies five meals to people in need for every T shirt purchased from them.

Receive weekly Thursday posts on how to be rich in what matters:

I will never share or sell your email address.