Being rich in what matters involves dealing with the deaths of loved ones in the best way we can. My friend Liz lost her 91 year old mother to death this past week. That moved me to write today’s post, based partly on how I weathered the death of my own mother three years ago, and partly on my experience as a counselor (I have an M.S. in counseling psychology).

You may not have had a loved one die lately, but chances are that one of your friends, colleagues or in-laws has. Most of us have said with all sincerity to a grieving person, “Let me know if there’s anything I can do”.  But the grieving person typically can’t think of what they need. The below is the advice that I wish someone had shared with me after my mother’s death. If even one of my readers shares this piece with someone who’s lost a loved one, I will count the hours I spent to write this post wonderfully spent.

Don’t expect your grief to be logical. It will defy logic. For example, it doesn’t matter if the loved one who died was very old, had stopped having any fun, and had voiced he or she was ready to go. Their death can feel devastating anyway. This is perhaps especially true of losing our mothers. However, my friend Cindy felt profound pain over the loss of her father, a pain that persisted for years, while her siblings “recovered” much more quickly. It was crucial not to judge Cindy in any way. Grief isn’t logical. It demands our respect, regardless.

Make the most of the memorial service or funeral that’s held for the loved one. The people who attend are often people you haven’t seen in many years, and they have great stories to share. I wrote and delivered a talk about my mother at her memorial service, and sang “Wayfaring Stranger” (I love to express myself via singing). Doing all this in my hometown of Whittier, California was joyful for me. After I returned home to Portland, Oregon I invited my friends over and re-created a shorter version of Mom’s service, doing my talk and song for them. They were very receptive. This helped me celebrate my mother’s life, and feel supported in my grief.

Support yourself with good nutrition - here are some healthy, tasty menus and recipes - and other forms of self-care. In the same way, give yourself the emotional nutrition of people who are good for you.  If a friend or colleague is a positive presence in your life, that person is nutrition for you. Try to spend more time with him or her. Minimize time with people who aren’t nutritious for you, in the same way you’d avoid eating poor quality food.

Let the tears hit you unexpectedly. Like sneaker waves at the beach, you don’t know when waves of grief will come up from 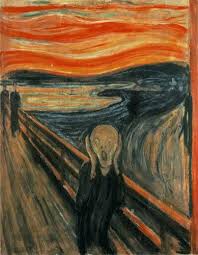 behind. You’ll feel fine for days or weeks, then get decked by a sucker punch in the gut, the punch of your profound loss. One day I found myself crying suddenly in my cubicle at work. I was facing my computer, sitting up with my back straight, but my face looked like The Scream by Edvard Munch. My boss approached — “Alison, have you seen the data on -”. I raised a hand to signal my need for space. He retreated. Five minutes later, my face returned to its normal shape, I went to his office. “What was that data you needed?” I didn’t judge myself for losing it temporarily, and neither did he.

You might grieve for the parent you didn’t have. This was the case with a friend of mine, Pat, some years ago. Her mother died, the mother she had seen steadily but by whom she’d never felt cherished or understood. The mother had grown up as an orphan, and in her adulthood had seen Pat, her oldest child, as competition for her husband’s attention. It created a painful, lifelong dynamic. Pat was more undone by the mother’s death than any of her four siblings, and for longer. She was grieving for the mother she hadn’t had, and it was a harder grief.

Don’t take on new commitments as you mourn a death. It will be hard enough just to deal with existing commitments. Scale those back, if you can. I frankly underperformed in my job following my mom’s death. I went through the minimal motions of handling email, sitting through meetings and returning phone calls, sometimes thinking to myself, “This is trivial bullshit compared to sitting with my mother as she lay dying.” Strange as it sounds, I wanted to experience that whole month of her decline, death and memorial service over again, it was so meaningful to me. Nobody at work ever said anything, but it’s a good thing I wasn’t an ICU nurse making life and death decisions.

Be open to unexpected gifts or insights that spring from a death.  When our housemate Gary died of lymphoma last November, it brought me this good thing that I could never have predicted.

Know what mourning looks like.  It looked like this for me: being distracted, being needy, being angry, being tender, zoning out, zoning in, drinking more than usual, sometimes feeling truly fine, sometimes feeling like I was dying, myself. Mourning can mean being reactive and behaving badly, and on the other hand it can mean being incredibly present in the here and now to the people in your life who are still alive. I felt more grateful than ever for my husband, for example. For some, mourning looks like “seeking behaviors”, where you go to the places your loved one used to go, or start wearing their clothes or jewelry, or seek to spend time with their friends. Some people actually see or hear their loved one after they die. My point is that mourning can look a million different ways. They’re all valid.

Expect the loved one’s first post-death birthday to be especially hard for you. June 25, 2011 was my mom’s first birthday after her death. I wanted to telework that day since I felt lead-hearted with grief. But a big grant contract needed to be signed, so I drove the 50 miles from Portland down to Salem, distracted as hell. Once in Salem, a police officer pulled me over and nicely explained I had run the stop sign two blocks back. I had no idea of what stop sign he was talking about ( I didn’t say that). I accepted my richly deserved ticket, and then mentioned I was normally a better driver, but my mother had recently died. “I’m so sorry,” the officer said. “My father died two days ago. It’s really hard.” “I’m so sorry for your loss!” I practically wailed. (Incidentally, I had no business driving that day. I should have signed the contract on an earlier day, or a later day.)

If the will is unequal and favors you, consider equalizing it. My husband Thor and I did this in 2009 after my mother-in-law died. Her will turned out to favor Thor and one brother over the other two siblings. Thor and I and the other favored brother wanted equality and loving relationships, so we wrote checks to equalize the distribution between the siblings right after

the estate issued its checks. We’ve never regretted doing this. It would have been much harder to do if we had financial problems, but Thor and I happily live below our means. It turns out that can be empowering.

Consider tithing any inheritance money you might eventually receive to a group the loved one adored. Volunteer time is another way to tithe or contribute. My husband and I donated 10% of what we received from my mother’s estate to Whittier Audubon Society, since she’d been a passionate birder and member of that group. The warm, handwritten thank-you note I received from its treasurer felt like yet another source of nutrition to me, another source of connectedness.

Grief over a loved one’s death will still hurt like hell, even if you do all of the the above things. But doing them can make the difference between believing you’re a victim on account of your loss, and believing you are part of something much bigger than yourself, i.e. a world that is rich with meaning and interconnectedness. My experience of my mother’s death convinced me more deeply than ever that the latter is the world in which I’m living.