When have you felt the most joyful and . . . . . complete in your life? For me it was this last Saturday night, November 13th, after I finished performing with “my” rock band at my 50th birthday party. I’d danced with my friends to about 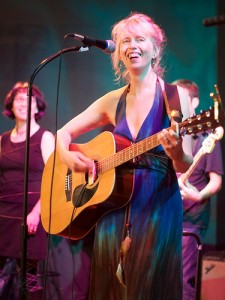 half the songs, and sung on the other half, lead on some songs, and back-up on others to my friends Hanmi and Jim Meyer.

The party for me was largely about community-building, bringing together friends from all different parts of my life. Libby, my friend since seventh grade, flew up from California, helped me all day with last-minute preparations, and then won the prize at the party for being the most helpful to others on the Birthday Quiz (which was based on the story-boards with photos and captions about my life that I’d put on display).

My community had all generations represented, from eight month old Muslah (brother of Mahamudi) to my friend Frank Kane, a 72 year old grandfather. School-age children used the dance floor below the stage as a playground, skidding around in their stocking feet, demonstrating their best baseball slides to me. On some songs, my friends Karen and John, in their mid-sixties, did swing-dancing that was lovely to behold.

Confession: I won’t pretend for a minute that my birthday party was low-consumption. Our group consumed a big salmon dinner and plenty of wine and beer. Any band use tons of equipment and electricity, and I went through four costume changes for my different performance numbers. I drew the line, though, at birthday presents: I told people ahead of time I wanted no purchased gifts, though a pre-loved book or an invitation to get together would be welcomed. I have everything I need, and my friends are my greatest treasure

I’ll post photos of the festivities later this month, after Christal Humble, my vivacious photographer, gets the pictures to me. I plan to have a party to watch the DVD after Jason Butler,  my videographer, compiles the DVD. I highly recommend Steve Brown, owner of Madison’s Bar & Grill here in Portland, to cater any event you might have. He and his staff (Cindy and Delaney) were attentive and fully invested in creating a joyful experience. Which was what happened.