People who are rich in what matters usually have a spiritual side. I do. It’s a sense, joyful or at least satisfying, of being connected to something greater than 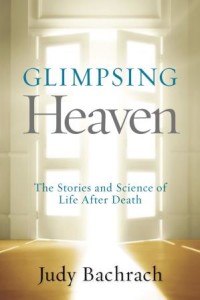 Taken a step further, this connectedness doesn’t end with the death of our physical bodies. It’s lodged in our souls, our consciousness that doesn’t just survive after physical death. It thrives.

Opinion, or fact? The book “Glimpsing Heaven” by investigative journalist Judy Bachrach reports that this is the documented experience of tens of thousands of people who experience clinical death, and return.

Ms. Bachrach calls them “death travelers”.  Here is the typical travel report from the other side:

Ms. Bachrach, a professor of journalism at John Cabot University in Rome, Italy,  entered her research a skeptic. She interviewed hospice nurses, doctors and medical researchers as well as people who’ve returned from clinical death.

She found that our growing database of death travel is largely due to medical technology leaping forward in the 80’s. “If the Titanic sank  today and we got there in time, we could bring most of those frozen people back to life,” states one doctor. It’s also due to our culture overcoming its fear of discussing death and spiritual experiences, and habit of dismissing those who do. Most death travelers stay quiet about their experiences.

I recommend “Glimpsing Heaven” to anyone interested in spirituality. I do suggest that it is misnamed if you have a traditional, Christian notion of heaven. No angels are reported by death travelers. No bearded Jesus, nor even God per se. Even the  death travelers who are staunch Christians don’t report these things.

Which I  think adds to their collective credibility. Even though I’m a lifelong churchgoer, I’ve always known that if I’d been born into a different culture, I’d have been given a non-Christian framework for my spirituality..

I say: if a framework is loving and life-giving, it’s a good one. It makes us richer in what matters.

Norman Maclean writes, “Eventually, all things merge into one, and a river runs through it.”  That unifying river is the experience described in “Glimpsing Heaven”.