Here is the way I get excited over cooking: when I’m at the intersection of great taste, great thrift, healthiness and low carbon impact. I also need my cooking to involve community. 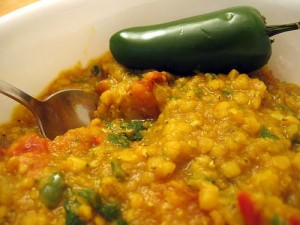 I got all my conditions satisfied last Sunday when I invited our neighbors Sue and David over to dinner and I served curried dahl over quinoa (similar to rice), a big lettuce and cabbage salad, and side-bowl garnishes of raisins, yogurt and chopped almonds. Everyone thought it was delicious. I almost doubled the above dahl recipe.

Back in my starving-artist days, the most salient fact to me about this meal would have been that it cost about $1.56 per person, including the mint tea we had for dessert. Now that I’m financially solid, the fact that most excites me is that the meal had a very low carbon load (the food created few carbon emissions).

What tickles me all around, though, is that often the healthiest foods are the lowest cost and lowest carbon foods as well. Examples are oatmeal, black beans, cabbage, brown rice, pinto beans, lentils, barley, onions, peanuts, carrots, potatoes. The expensive foods in many cases are also the ones highest in fat and highest in carbon emissions in their production: beef, cheese, pork, and even poultry, to a somewhat lesser degree. A thrifty and earth-friendly kitchen could build menus around the first group, and use small amounts of the second group for flavor accents.

Note: the dahl recipe above can use either lentils or split peas, and it can be served over couscous, rice, quinoa or other cooked grains. I’m a big fan of using whatever is on hand, rather than making trips to the store for one or two items.

Final note: We buy most dry items in bulk, not in packages. The spices in this recipe are expensive in the conventionally-sized grocery store jars. But you can buy them in bulk at some stores at lower prices and in smaller quantities. I see spices as THE crucial value-add to the low-cost legumes and grains that make the latter delicious and satisfying enough to be a meat substitute. While spices are costly per ounce, they get used in tiny quantities. Because they enable the ultra-cheap legumes to be real meals, I see spices as much cheaper than meat. And unfortunately, the meat industry is a heavy contributor to global warming, through both carbon and methane emissions.

Receive weekly posts on how to be rich in what matters