His voice is deep, as in basso profundo deep, yet animated. His bare right arm, the only part of his body not covered by his red and gold robe, 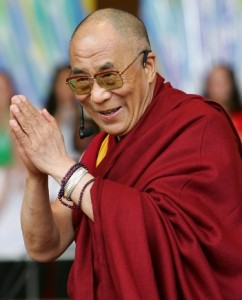 gestures energetically when he talks, like an orchestra conductor.  All 11,000 of us at Memorial Coliseum yesterday morning were hanging on every word that His Holiness the Dalai Lama was saying.

“Spending, spending, spending on luxuries and lifestyle,” he said. “Not so good. One side of us is greedy. Another side of us says, be careful, restrict these impulses.  We must prepare for limits, so that they are not unexpected when they come,” he said. “Happiness comes from our relationships with each other,” the Dalai Lama said.

Governor Kitzhaber followed up, stating that research has shown that after a certain income threshold is reached, additional income generally does not make people any happier. “The rate at which we consume makes a lot of difference,” he said.

Author and activist David Suzuki told about spending time with his father the last two weeks before his death. “I’m dying a rich man,” his father said many times, with conviction. He wasn’t dollar-rich. He was rich in his relationships with family and friends. So, he was dying a rich man.

I loved hearing from the Dalai Lama, and the notable panel around him, the same thing I’ve been saying since late 2007 here at Diamond-Cut Life, i.e. that we don’t need to consume a lot to be happy.

But consuming less is easier talked about than accomplished, including for the author of this blog about more joy with less stuff. The beliefs I share with the Dalai Lama got tested this past week.

On Tuesday a little girl at the Bridger playground near my house said to me, “Are you someone’s grandma?” I hoped I’d heard her wrong, so I said “What?” But she repeated those same damningly aging words all over again.

“No, I’m not,” I said, as nicely as possible. I bicycled on home, scared and strangely hurt, and that afternoon I spent an obscene amount of money at Nordstrom’s on two (yes, just two) anti-aging skin care products made by La Prairie.  That’s totally at odds with my values.

Let me clarify. It’s not that it wouldn’t be wonderful to be a grandmother. But I’m only 52. It drives me apeshit for people to think I’m already a senior citizen. Oh dear, that needs clarification, too. Some of my favorite people in the world are senior citizens. I just don’t want to look “old”. I’m too vain. In this culture, being attractive is equated with looking youthful.

So far I’ve been using these ding-dang skin scare  (was that a Freudian slip?) products that are supposed to reverse my face’s aging process. They maybe are making a little difference, but not a lot more than the cheap anti-aging creams that I’ve long bought from Rite-Aid.

A part of me, the part of me that is spiritual, and knows better, and loves the Dalai Lama, is ready to march right back to Nordstroms and return the luxury products, and donate the money to a cause that reduces the huge and growing gap between rich and poor, the gap that the Dalai Lama and I agree is immoral.

This part of me knows full well that even if these La Prairie products could delay my being mistaken again for a grandma for awhile, in the long term it’s absolutely a losing battle against aging. I have to accept my aging process, no matter what. As Buddhism teaches, everything here on earth is impermanent.

The Dalai Lama says, “My religion is kindness”. He does not espouse ideologies that polarize people or create enemies. He honors nature, and points out that we are part of it, connected and interdependent with it and with each other.

The problem is that we let ourselves feel separated from nature, and from each other. Feeling separate fuels a lot of our over-consumption. And our over-consumption is driving climate change. Yesterday morning Andrea Durbin, the director of Oregon Environmental Council, said it was auspicious that they were having this environmental summit with the Dalai Lama in the same week that our planet reached 400 parts carbon dioxide in the atmosphere per million parts. 350 is considered the upper limit for a stable atmosphere, and is the inspiration for 350.org, the activist group with global reach that is campaigning to limit production and investments in fossil fuels.

I support 350.org and its outward, activist focus. I am with the Dalai Lama, though, in his spiritual focus on our need to overcome our material greed in our pursuit of happiness. Fossil fuels wouldn’t be so profitable if our current culture wasn’t so addicted to their products, and the lifestyle they make possible.

And I’m still embedded in my culture, addicted to an ageist, youth-oriented definition of beauty . What do you think I should do? Should I return the overpriced skin care (skin scare) products? What do you struggle with the most when it comes to consumption?  (See here for the sequel/followup).