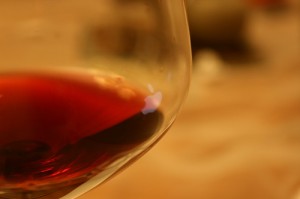 Earlier this month in Part I of The Flow of Wine and Money I noted that wine and libation are linked to the sociability I love — yet they’re a luxury, in the face of a nation and world that are way financially stressed.

We all know that what gets measured, gets managed. I had calculated that my drinking an average of four glasses of wine per week at $5/glass, since I turned 21, has added up to a $30,000 lifetime investment in wine so far. Ouch! (And I’m far from being a sophisticated connoisseur who reaches for the stuff featuring the good bouquet, or nose, I think it’s called.)

For the last four weeks I’ve been tracking whether I drink or not in a given day, and how much when I do drink. The report: I’ve had nothing to drink slightly more days than not, and when I do it’s almost always either one or two glasses of wine or cocktails.

Sounds unremarkable – but the process of tracking my wine consumption led to my refraining more often than I normally would. It’s much more satisfying to mark a tally in the N column than in the Y column. The tallying itself is a motivator that changes my behavior and leads me to consume less. What gets measured, gets managed.

Of course, drinking is linked to sociability, even community, which I consider central to the diamond-cut life. Yet last night when the champagne was flowing for my friend Jean’s 50th birthday, I had sparkling pear juice in the same elegant glass as the others, and felt no less sociable for it.

Decision: in 2009 I plan to keep tracking my wine consumption with the goal of minimizing it. I’ll put the dollars saved into increasing my giving to Women For Women International.

Coming up in the final days of December: Top Five New Years Resolutions For Making A Difference, and Part II of Top Ten Tips For Living With Others (see Part I here).