“What was the best part of your day?” my husband asked me last night in bed. I was cuddled up with my head on his shoulder. Sometimes in this 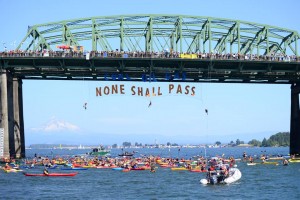 On the Columbia River yesterday: a symbolic flotilla against proposed fossil fuel exports that would mean game over for our climate

nightly ritual of ours I think for a bit, reflecting back over the day, before I answer. But last night my words sprang like a racehorse from the starting gate.

“Being in the climate change demonstration,” I said. He smiled, because we had done it together, on the Vancouver, Washington side of the Columbia River. The nonprofit groups Rising Tide and 350.org organized it; it’s part of the Summer Heat climate actions happening across the U.S. and also the world. Our peaceful demonstration aimed to draw a line against the proposed building of 15 export terminals for coal, oil and gas that would turn our Northwest coastline from Oregon to Alaska into a vast fossil fuel corridor. Don’t build it and they won’t come is the motto.

Climate change demonstrators are utterly normal people. Our group that spanned the long I-5 bridge across the Columbia yesterday looked like you and me (literally, on the me). Parents with young children on their backs. Teachers, consultants, massage therapists. Lots of retirees. People concerned about their kids’ world, their grandkids’ world, their communities and world in general (Thor and I have no kids). I saw one guy with dreadlocks. Probably fewer tattoos among us 600 or so demonstrators than you see in your average trip to the grocery store. We’re not talking wild-eyed radicals here, but responsible citizens, like the thousands of civil rights demonstrators in the 1960’s who helped create crucial change in our culture.

Climate change is being driven both by profit-hungry corporations and by all of our first world, fossil-fueled lifestyles. I have to say that the climate action groups, as much as I respect and support them, focus on the first half of that equation, and leave out the second half. We’ve got to use less fossil fuels if we want corporations to sell less fossil fuels. I should have brought posters of LED lights and bicycles, come to think of it. Models of wind turbines and solar panels were some of the best parts of the demonstration, in my view, because renewable energy is a huge part of the solution to climate change.

Fossil fuels need to stay in the ground. That’s the only way we’ll bring climate change under control, because burning fossil fuels heats up and destabilizes the atmosphere we all share. Also, if corporations can’t ship the coal, oil and natural gas — the focus of our demonstration — they can’t burn it.

Why was yesterday’s climate demonstration the best part of my day, actually of my July? Because it brought my actions into congruence with my beliefs.

Cutest kid: Cassidy P.,  cherub-faced, curly-headed daughter of Kate P., a colleague I like but hadn’t seen in four years. We agreed the demonstration was a great place to reconnect.

Most thought-provoking T-shirt: Unf*ck the world (I added the *). When I think about it, this is the most succinct possible slogan for addressing climate change, even though it’s not the most tactful.

Coolest group: Portland Raging Grannies. These colorfully-clad women drew the biggest applause of the day with one spirited, progressive song after another about addressing climate change. The Seattle Raging Grannies came down to join their Portland sisters for this performance.

What kinds of things are typically the best part of your day, or of your month? Comments here.

Coming up next Sunday: a report on my climbing of South Sister, the third highest peak in Oregon. I’m attempting this with my friend Colleen Kaleda, with whom I climbed Mount St. Helens last summer. Tune in to learn if I succeed, and to hear how sore I am. My theory is that climbing a big, hard mountain is a metaphor for the focused discipline it would take for me to eventually do civil disobedience on behalf of climate action.