Happy Summer Solstice! Today is the longest day of the year. Not only that, but the sun — the life-giving sun — will reach its highest point in the sky today that it will reach all year. To the ancients, such as those who built Stonehenge, 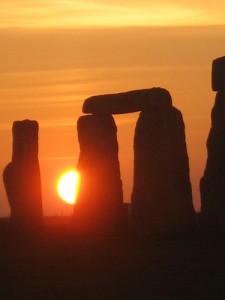 solstice was a holiday that celebrated fertility. We take the sun and the fertility and the food and life those make possible for granted. Our ancestors were less cavalier. Life was more precarious for them.

Here in Portland Oregon where I live, the sun, as in bright sunlight,  is a very big deal. I hadn’t realized the full nature of our sun-hunger here in the Willamette Valley until a recent conference when we got excited over a ‘sun break’, i.e. the sun breaking through the cloud cover. A fellow from Montana said, “What in the hell is a sun break?”  That was when I realized how much we are shaped by the particular spot of land we lcall home.

For the astronomers and scientifically-minded among my readers, summer solstice is due to the earth’s axial tilt being the most sharply inclined toward the sun. Axial tilt is also called ‘obliquity’ (I love that word).

Sorry I lied at the end of my last post (I had forgotten about solstice, and fertility, and sun-hunger, and how I’d need to write about them). My next post will be Top Ten Things We Can Happily Live Without. Then I plan on a guest post by Tess Giles Marshall of Pilgrim’s Moon; check out her lyrical post on summer solstice she just posted today. Tess lives in the United Kingdom, and informs us that Druids, pagans and other revellers will celebrate summer solstice today at Stonehenge, and people throughout Europe will dance and feast.

A final musing: I wonder if it is the United States’ Puritan heritage that makes us leery of celebrating pagan holidays (note: pagan simply meant, originally, ‘from the country’). A minister friend of mine, one of the people I respect most in the world, told me she finds it problematic to worship Creation (the earth, as pagans do) rather than the Creator (God, as Christians and other monotheists do). This writer doesn’t see a duality, but a both/and. I love Creation, and solstice, and I love God and going to church.