We spent our weekend outdoors in the dazzling sunshine building our chicken coop and interacting with our neighbors.  (The first activity nicely fueled the second activity).  About $400 and 25 person-hours later,we have what my housemate Evan cheerfully terms one expensive, half-assed chicken coop. (None of us claim to be highly skilled carpenters.) 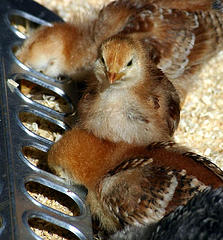 How did our month-old chicks spend their weekend? During most of it they complained mouthily about still being in the large cardboard box they had outgrown. Our response was to work semi-feverishly to finish their housing upgrade in time for Sunday afternoon. I even missed both church and choir practice to meet the chicken-driven deadline, leaving apologetic but vague voicemails for my choir director, a fellow alto and a soprano. For instance, I didn’t tell them that Sangria, Cleopatra, Lolita and Dawn were cheeping angrily at me and occasionally hurling themselves against their screen ceiling which was weighted down on top by Long Walk To Freedom, the enormous paperback by Nelson Mandela.

Then once we liberated them into their tenderly constructed if somewhat awkward new domicile, Sangria thanked us by staging a breakout. The little dickens  slipped right between the green wires. This took us completely by surprise. We had spent the weekend strategizing to keep the raccoons out, not thinking the chicks would sabotage their own housing upgrade. Of course we had to retrieve her.

I climbed down into Gail’s backyard, having just introduced myself to her yesterday as a kind of chicken ambassador. Gail had been very friendly, and had mentioned a fondness for fresh eggs; my promise of future eggs I think helped build a bond. Thor approached Sangria from our house’s side of the bushes. Gail must have seen my stalking behavior from her kitchen window, because soon she was at my side, wanting to help.

“Hold your hands up to help herd her,” I suggested, as I crept over to the right and Sangria dithered anxiously back and forth. “I’ve never handled a chicken,” Gail informed me, gamely making swimming motions with her arms that seemed more dancerly than round-up oriented. Eventually we got Sangria back into her yard, but of course her breakout had made us late for dinner across the street at Sue and David’s house.

They were understanding. They are also very good cooks, and helpful to boot. After a delicious dinner of tabouleh, asparagus and flaky cod heaped with colorful peppers and parsley, they happily trooped over in the fading light to hold towels against the too-large green mesh so I could catch Sangria and rejoin her with her brethren in the light-bulb-warmed wooden hen-house.

Our mechanically gifted neighbor Lenny sauntered over as we were finishing up. “This is so trailer,” I laughed at our sagging-roofed avian hotel, before he could say it.

“Oh, no. You have to look at these projects as organic,” he said enthusiastically. “They evolve over time.” We the clumsy carpenters could not have said it better ourselves.